Our wonderful judge, Charles Mann, chose to write a comment about each of the entries rather than handing out awards this month. I think each of you who participated will find his thoughts extremely helpful. As always, a big thank you to to Charles for offering an unusual and worthwhile subject this month…..Fran Sorin

Despite the late season, eight entries were received during the November Photo Contest and I was pleasantly surprised by the quality, creativity and playfulness of the Portraits submitted. Here are some of my thoughts about each one in the order of their appearance: Oh Want a Beautiful Garden / Chicagoland: Love it ! This picture has just about everything going for it. The subject is cute and spontaneous while the light and setting is a dreamy collage of warm fall colors. The out-of-focus foreground and backdrop bring the eye to the subject, who floats up into the frame like an elf or an angel. Allie’s mischievous grin,- not to mention that oversize hat, takes us back to the kaleidoscopic view we all had when were Little People in a Big World. The glow of the back-lighted leaves and plants works very well to illuminate the whole composition overall. I would like to see this photo cropped or shot again with Allie larger in the frame, as the proportion tends to dwarf her a little bit, and we want to have a better look at her expression and to have her be a more prominent part of the picture. 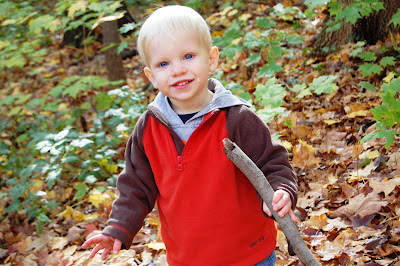 Suddenly I Seed : This is a pleasing straightforward portrait, with somewhat even lighting, which is not always an easy thing to achieve. The light source is coming from behind our young hiker and his expression in one of guileless happiness. It looks as if the photographer may have used either a fill flash ( though I don’t see the typical white spot in the eyes !) or Photoshop to skillfully open up and brighten face and jacket. One point of observation is the area with blown-out high lights at the top of the head and the mildly distracting hot spots on the leaves to the left rear. If the original capture was not overexposed in these areas, we might use Photoshop to cool them down and reduce the harsh notes they introduce. 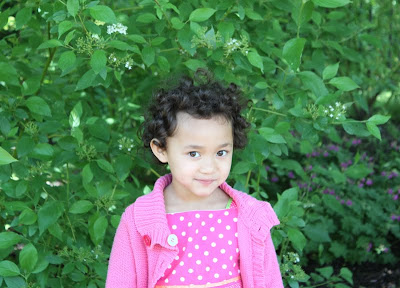 The Suburban Gardener: This is yet simpler and flatly lighted portrait. Without the added punch of a charismatic backdrop, it depends entirely on the personality of the subject. The face has a slightly coy, Mona-Lisa expression, which carries the photo beyond the banality of a snapshot and compels a second and third look. Here too, I would like to have had the subject be more dominant in the frame, since the neutral backdrop does not participate so much, and I’d like to elevate the subject up from the bottom to be a bit more accessible. 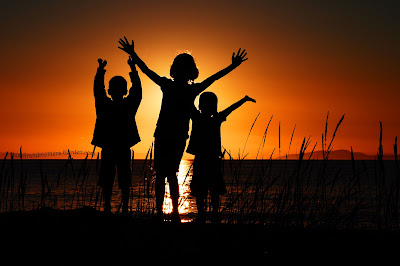 This Grandmother’s Garden: This photo teaches us a lot about thinking outside the box, ah … er, garden! Putting the subjects directly between the camera and the sunset really works here, and the (presumably calculated) poses take this photo right over into the realm of an arty archetype. We don’t care if the “garden” is nowhere to be seen ! This is a fun and endearing moment, and the accompanying poetry (William Blake !) sends the whole thing off the chart of our expectations. I really like the orange glow, the black silhouettes, the highlighted edges and the three quirky poses. I can’t add much to this! I would probably see if I could to dampen the extreme blown-out white strip in the center with a layer mask or two in Photoshop.

East Side Patch: This is a really fun shot, with a lot of whimsy and cheekiness to offer. The off center composition is clever and playful, with the pokeweed berries draping down right to the subject, who is waiting for us with a hilarious getup and a nonchalant expression. Is that a young Terry Thomas? It’s a great example of really making the composition and subject bring a lively air to the photo. The light is coming from above and slightly behind, creating interesting effects that complement the shot. My only tinkering here would me to move the subject slightly more into the frame to minimize the open area in the lower right hand corner, which contributes least to the overall shot. 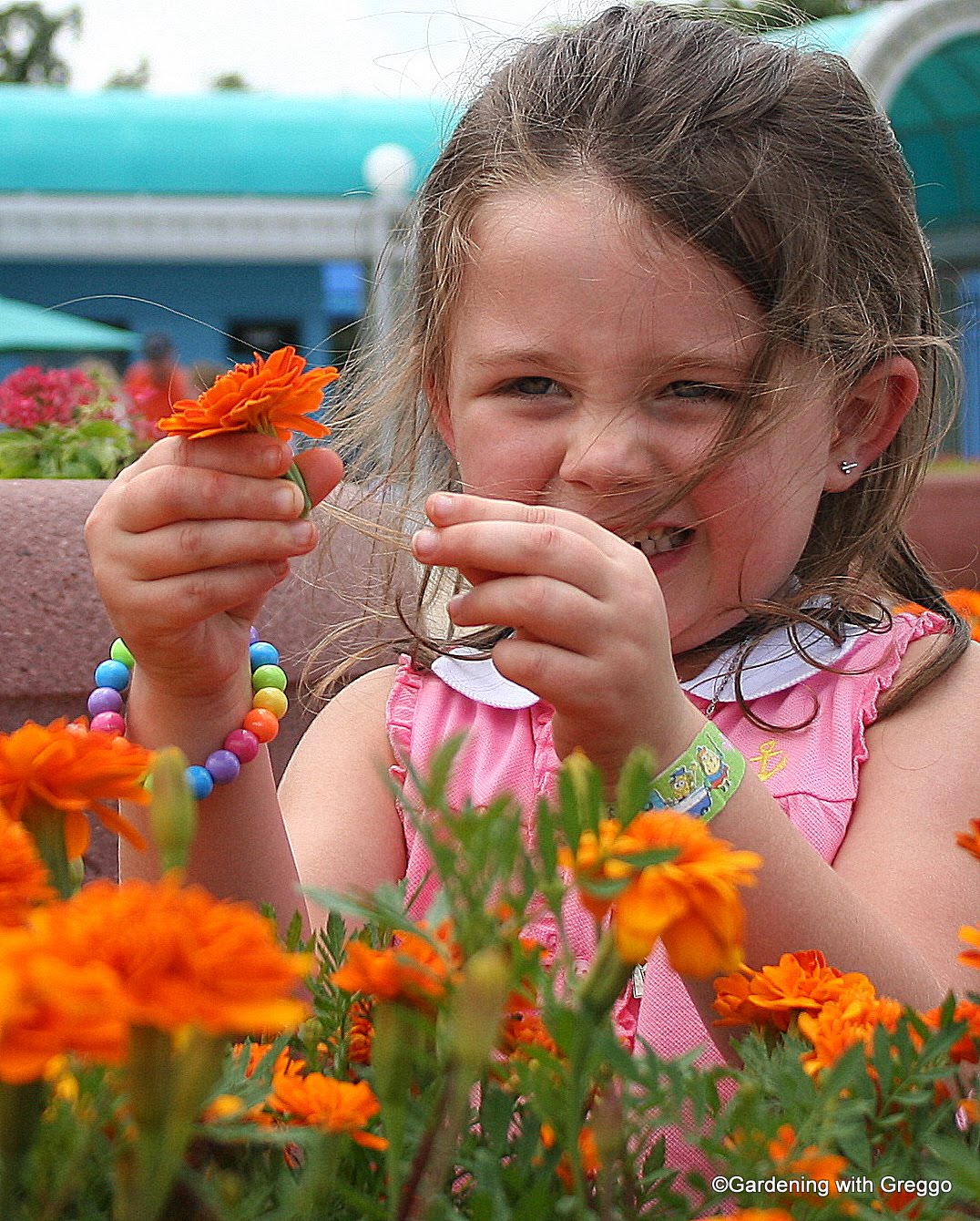 Gardening with Greggo: Here’s a cute photo which is more than just a straightforward portrait. I like the way the orange marigolds create some juicy color play with the pink dress, the bracelet and the turquoise blue of the background. The light is flat and does not impinge on or participate in the photo too much, which is a plus overall. I’d like to see the background to the left of center be a little less intrusive, and it would be fun to see her face and expression a little more clearly revealed. The Potager Page: A Gardener to Be is the name of this study of a young child’s face in a very fleeting (according to the photographer) moment of reflection. The juxtaposition of the face against the monochromatic blue sky with only the yellow shirt as a foil, creates a singular emphasis on the face and obviates the backdrop, using it to isolate the subject. I think this is a useful effect, but concentrates the entire weight and energy on the subject. The photographer’s comment tells us the image was not Photoshopped, nor was a flash used. Although this is a pleasing image as is, I do agree that, some brightening and contrast could be added to make the face pop and seem more compelling.

Piece of Eden: Here’s another wonderful example of “portraiture” redefined – and what a lovely subject it is. I’m not sure just how you instruct a preying / praying mantis to look straight into the lens, but this slender model is obviously a professional and knows how to strike a pose. The focus is sharp on the face, and it helps that most of the surrounding detail is blurred out, though the patchy blob of… what? She is standing on seems distracting. I’d love to make this photo again with the mantis on a cleaner, less noticeable and ambiguous perch. I’d also like to see if I could punch up the contrast a little bit with a Curves layer in Photoshop.

I feel grateful to have been offered the chance to propose a subject and review the entries for this month’s Photo contest. I’d like to thank all the entrants and congratulate them on being out there and bringing in some fun and interesting images. They are all worthy! As I mentioned we learn from every photo, and being compelled to look carefully at the variety of insightful entries has given me some new insights.

I’ve awarded this month’s the Gold Medal to the photo that seems to me to have incorporated many of the little things that make a portrait extraordinary – special light, a great subject, serendipity and soul, plus that special charm – the shot of Allie in Oh What a Beautiful Garden / Chicagoland.

I want to give a special Silver Medal award to The Grandmother’s Garden shot of her grandchildren in silhouette. This is a photo that moves beyond the ordinary and makes art out of the ordinary.”

Picture This Photo Contest won’t be  running in December. Wishing all of you a joyful holiday!

I’m sorry that I wasn’t able to get a photo to submit for nov. All of the photos are beautiful. I have to point something out because I got a bit nervous looking at the beautiful photo from The Grandmother’s Garden. Maybe they know it already but the Pokeweed berries that are next to that adorable child are poisonous. They look so tempting to taste and children are very inquisitive. I just wouldn’t want something terrible to happen. Great photo though!!!

ARRGGHH, we were away for a week and while on vacation I prepared my post and entry and then totally forgot about posting it when we returned! However, as always, the instructions for the contest and especially the critiques of the winners (and in this case, of all of them – thanks, Mr. Mann, for taking the extra time this month!) teach me so much! I look forward to this feature every month. It has made me a much better garden photographer.

Thank you for sharing your thoughts and expertise. Wonderful words of encouragement for each of us. I’m a little confused…is East Patch the winner of the Silver or is This Grandmother’s Garden? The verbiage doesn’t match the picture. No matter, it was delightful to share my photo. Most delightful is the sweet memory of an enchanting sunset with my grandkids!

Carolyn,
You’re the Silver Medal winner. And you should be darn proud. What an absolutely delicious photo. Feel free to grab the medal and place on your site. Have a wonderful holiday season. Fran

Charles, I’m so thrilled by these photos and what I’ve learned from your comments. I (ahem) have an extremely cute 3-year-old grandson who is usually a blur in photos, so I know how hard it is to get a good one. Kids don’t pose, they flit. But seize the day, because this is THE perfect age to shoot them in all their innocent sweetness and beauty.

Do you have any tricks for getting a kid to stop in his tracks and look at you? Polite requests and wheedling are ignored. I’ve resorted to making odd sounds (yelping, barking) and asking questions like, “Is that a hedgehog on my head?”

Thank you very much for your informative review of the image of my halfling under the pokeweed berries…I really enjoyed reading your dissection and visual observations of the composition.

Lynn, I have so many poisonous plants in the ESPatch it is ridiculous, I have communicated what is, and what is not out of bounds since both my kids could walk…they now tell me which and what is toxic (usually in Latin:-)…Like I have forgotten!

Great and informative competition GGW as always, a lot of fun.

Thank you Charles! I appreciate all the feed back that you gave each picture, I’ve learned a lot. This was a fun subject!

I enjoyed both the photos and the judge’s feedback. By the way, you have a mix-up with the silver medal winner at the very end. You have juxtaposed East Side Patch’s photo with your text stating that Grandmother’s Garden (silhouette against sunset) is the Silver winner.